The “First Step Act,” also known as, “The Formerly Incarcerated Reenter Society Transformed Safely Transitioning Every Person Act,” is a bipartisan criminal reform bill that passed in both, the House of Representatives, and the U.S. Senate, on December 18, of 2018. The act was signed by President Donald Trump on December 21, 2018. Many have praised congress and the president for signing this legislation, but I have a few problems with the legislation, that I am prepared to share in this article. Before I make my argument, I would like to bring up a few facts, to help put things into perspective for the readers.

In November of 2015,  a local activist named Mercutio Southall Jr was recorded being punched, kicked, and choked by several attendees at a Donald Trump rally in Alabama. The next day, Trump suggested that the protester was “obnoxious” and “should have been roughed up.” For balance, it was also reported that Southall shouted, “Black Lives Matter” and “Dump Trump.”

Two days later, Donald Trump retweeted an anti-Black, fake crime statistic, promoting that Blacks were responsible for 81% of homicides in which the victims were white. The numbers in the fake chart were immediately debunked, and the source cited in the photo,  “Crime Statistics Bureau – San Francisco” — was proven to have never existed.

Also, let’s not forget Donald Trump’s response, in defense of the bogus anti-Black tweet. When Trump was confronted about the tweet by Bill O’Reilly on Fox News, on Nov. 23, he confirmed that he retweeted the graphic, and admitted that he had not checked the statistics, & that the graphic came “from sources that are very credible.” You can watch the video of the exchange on Fox News starting at the 4:10 mark.

Towards the end of the interview, I would like to point to the following dialogue between the two men.

O’Reilly: I told you, you shouldn’t retweet ever. You shouldn’t be tweeting. Give it up for Lent.

Now take a 2nd to breathe… Now ask yourself… Is Trump the kind of guy, you think would champion crime data reform to aid Blacks who have been disenfranchised, by an unjust prison industry? No, Seriously, think about what I am asking.

So let me address what’s wrong with the First Step Act Bill?

How much money do inmates earn by the hour? Maybe around 20 to 50 cents an hour. How has the prison industry aided Blacks in the past, and how exactly is the prison industry going to help Blacks now? This is an insult to our intelligence. This is a way for corporations to utilize the prisons for free labor, and politicians (both Republican and Democrats) fully comprehended this, when they approved section 605 in the First Step Act Bill.

Controlled and opinionated assessments are not scientific nor are they factually accurate. They have been proven to be pseudoscientific and predictive. (Example: Look at IQ testing) Who’s conducting these assessments? What methodology will be used by these individuals assessing, to determine if someone is likely to commit, or not commit a crime once they are released from prison? If someone has a livable wage job awaiting through the program, there is no way to possibly predict that they will commit crimes, once they are released. If livable wage jobs are not accessible, then obviously the chances of someone resorting to crime are likely … This is a commonsense assessment. This process is very dangerous because inmates are now at the mercy of the single individual, who may not have their best interest at heart. If a prisoner is a Black activist, the person doing the assessment may hold that against the prisoner and suggest he/she is a risk, simply based on personal biases against Black activists. This is horrible language in the law, because it’s open to one’s own bias interpretation (No one finds it acceptable to use ACT results to positively predict who will graduate and get a high paying job out of college, so why would congress think it makes sense to use a non-scientific assessment test, to predict the same for inmates, with the authority to deny release?)

The bill reads – “The Director of the Bureau of Prisons shall provide all prisoners with the opportunity to actively participate in evidence-based recidivism reduction programs or productive activities, according to their specific criminogenic needs, throughout their entire term of incarceration. Priority for participation in recidivism reduction programs shall be given to medium-risk and high-risk prisoners, with access to productive activities given to minimum-risk and low-risk prisoners.”

We would like to know, what are some specific evidence-based recidivism reduction programs, and why are they not popular? How have they been used to reduce the United States prison population in the past? Evidence-based means you should be able to present the evidence when asked. Who determines who are minimum-risk and low-risk prisoners? Who determines when a high-risk prisoner becomes minimum-risk, or a minimum-risk prisoner becomes, low-risk? This points back to the flawed bias methodologies, that can, and are likely to be used, while conducting assessment-based tests. Sounds like a trick bag, if you ask me. There is no single assurance that participating in these “programs” will reduce your sentence. A psychiatrist always has the last say, and this person may not have the best interest of the prisoner.  How many Blacks in federal prisons are considered, low-risk? What is a high-risk criminal? Is it whatever the psychiatrist says it is? (I’m White and I say so) This bill is really suspect.

FIREARMS STORAGE – is more hidden language, for personal objectives, that is not needed in the bill

Nothing in this First Step Act is definite or guaranteed, based on specific behavior and results by inmates …. It’s always subject to someone else’s interpretation, even regarding the elderly. There is no language that requires the prison review board to even consider the release of inmates over a certain age if they have displayed good conduct and have already served a certain amount of time. No guarantees at all … The bill always resorts to someone making the decision… someones bias opinion, who follows no specific methodology. The “Compassionate Release Request,” is a joke. Prisoners can already make a compassionate release request without the language used in the First Step Act. These politicians are playing games.

Who determines if a pregnant inmate is an immediate flight rate? It sounds like an excuse to restrain a pregnant inmate when legally, they are not supposed to. There is just too much funny language all throughout this bill.

Some of these arguments were brought to my attention by UJ, and are not all originally my own. 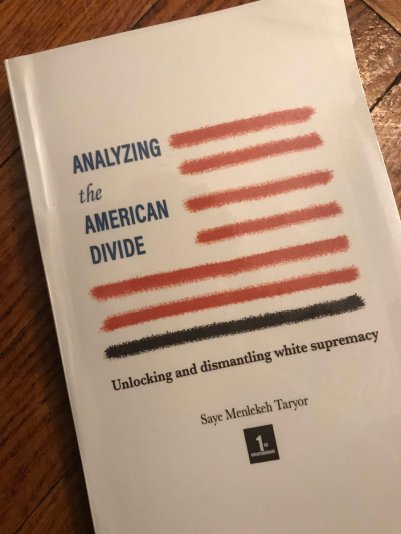 “Analyzing The American Divide” highlights and debunks propaganda promoted by Europeans, towards people of African descent, while addressing charges of cannibalism, high crime rates, low IQ claims by race realists, and the so-called, lack of advanced civilizations by Black Africans.

This book is a must-read for all, as Brother Saye provides an extensive outlook on how the British, and the Loyalists, viewed the American Revolution, while also illuminating the real dynamics, surrounding America’s Civil War.

You can now Order for only $20

Published by 1up Atlanta Examiner

Everything Atlanta Everything New View all posts by 1up Atlanta Examiner